Renewable energies have not only begun to boom as a result of the Paris Agreement. But the steadily increasing demand continues to shift the limits of technology on an ongoing basis. Wind turbines are growing in size and the associated forces are becoming more extreme – nonetheless, they must operate with absolute reliability and a minimum of maintenance effort. Coatings and surface treatments significantly extend the service life of their components and thus the lifetime of the entire system.

With the Paris Agreement, the interest in renewable energies has increased worldwide, as has the associated global level of investment. The agreement that was adopted on 12 December 2015 at the UN Climate Change Conference in Paris provides for a limitation of global warming caused by human influences to significantly less than 2 °C as compared to preindustrial values. It took effect on 4 November 2016. As of May of 2017, a total of 145 nations had signed it and these countries together account for 82.95% of global emissions.

However, the climate goals of this agreement can only be reached if renewable energy sources are increasingly employed, in other words, primarily water, sun and wind energy. “Record low prices … will be the primary drivers for the development of wind power in the short to medium term, and the evolution of the Paris Agreement … will only add to the industry’s momentum,” writes the Global Wind Energy Council GWEC in its 2016 annual report.

All of the power plants in the world – fossil, atomic and regenerative – together produce about 24 000 terawatt hours of electricity (2015). Globally, wind energy power plants contribute 487 GW of overall power output to this and generate about 3.7 percent of the energy consumed worldwide. In total, about 80 countries have installed onshore or offshore wind energy systems. The “world champions” of wind energy are China, the USA, Germany and India. “Wind energy continues to grow at a two-digit rate,” explains Steve Sawyer, General Secretary of the GWEC.

While the market offers a good deal of potential for the manufacturers of wind turbines and their components, the technological challenges are becoming greater – including literally in terms of size. The increased requirements concerning the power of wind turbines means that the equipment itself is growing larger. Accordingly, enormous forces are at work on the individual components.

For example, the ring gear in the gear box of a modern wind turbine can have a diameter measuring two or even three metres. In cooperation with a well-known manufacturer, Oerlikon Balzers engineers have conducted test series in which the surfaces of these gears have been treated with the modern plasma nitriding process BALITHERM IONIT. In contrast to gas nitriding in common use today, this treatment causes signifi cantly less warpage and at the same time achieves a higher load-bearing capacity.

»In plain English, that means: The dimensions the design engineer has called for are maintained. Compared to gas nitriding, the tolerances for roundness, planarity and parallelism can be adhered to much better, even with such large parts as the ring gears, and that is of great importance for the service life of a system in which enormous forces are at work simply because of its size,« explains Sascha Hessel, Director of Sales and Operations at Oerlikon Balzers Germany.

The results of the test series were confirmed by a study of the FZG Institute at the Technical University of Munich and in the meantime, Oerlikon Balzers has received a concomitant order from this development partner for the treatment of ring gears. 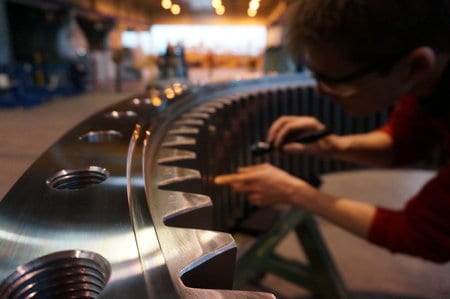 Less maintenance required for systems that are difficult to access

Every single part in a wind turbine is essential for trouble-free energy production. Some ensure that the system operates as efficiently as possible: Yaw rings position the upper part of the system, the nacelle, so that it faces straight into the wind. Pitch gears, on the other hand, position the rotor blades in such a way that energy exploitation is maximized. Oerlikon Metco coats these gears with zinc or zinc-aluminum by means of electric arc wire spraying to protect them against corrosion.

Oerlikon Balzers offers thin-film solutions to protect sun gears and planets as well as roller bearings from wear. This is important because in most wind turbines, the running lubrication is inadequate or often very difficult to realize – just consider offshore systems. Coating the gears and roller bearings with BALINIT C improves the abrasion resistance, thereby increasing the service life of the components.

However, Oerlikon has solutions not only for the internal parts of wind turbines, but also for external parts. For example, the German Oerlikon Metco location in Weissenborn specializes in the repair of rotor shafts. “The rotor shaft, which measures up to six metres, has a so-called bearing shell. If extreme forces operate on the system, for example due to a sudden, unexpected standstill of the gigantic rotor blades, this shell can slip and damage the shaft. This damage can be repaired, and in Weissenborn, we use thermal spraying as a process step for the regeneration,” explains Franz Jansen, managing director of Oerlikon Metco Coatings, Germany.

The journey’s destination is clear after the Paris Agreement. Whether it will actually be achieved depends on the will of the nations that have signed. “Wind power is a mature technology. The cost-stability of wind power makes it a very attractive option for utilities, independent power producers and companies who are looking for a hedge against the wildly fluctuating prices of fossil fuels while at the same time reducing their carbon footprint. There is still an acute need around the world for new power generation which is clean, affordable, indigenous, reliable and quick to install. Wind power is leading the charge in the transition away from fossil fuels, and continues to blow away the competition on price, performance and reliability” sums up the GWEC perspective.