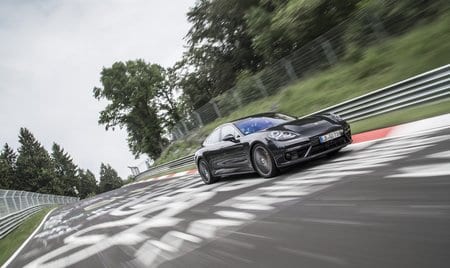 One journalist, after watching the first race in 1927, described the winding steep grades and tight corners through the Eifel forests as something that could have been designed by a “reeling, drunken giant.” In its 33rd year, three-time world champion driver Jackie Stewart bestowed the track’s enduring nickname: Green Hell.

Even with modifications over the years to improve safety — in 1970, Formula 1 drivers boycotted the course because it was so dangerous — the Nordschleife remains a challenge.

Unlike many race courses, the Nordschleife is actually open to the public, so you could take your car out for a spin. “But if you’re in the typical consumer auto, you probably won’t match the course record for a sedan of 7 minutes and 38 seconds that the new Porsche Panamera Turbo recently set”, commented Dr.-Ing. Thomas Günther, Director Development V-Engines, Porsche AG. The time is even more impressive when you realize that the track record set by the Porsche 918 Spyder, technically the most sophisticated sports car of all time, was 6 minutes and 57 seconds.

The Panamera combines extraordinary performance with incredible efficiency. Its modular 4-litre V8 engine drives between 5 750 and 6 000 rpm and top power of 550 hp. The acceleration propels you from 0 to 100 km/h, or roughly 62 mph, in 3.8 seconds. That approaches the kick of a fast street-legal production motorcycle.

And yet, for all the power, fuel efficiency is important as well. The new adaptive cylinder control system effectively, and unperceptively to the driver, switches between 8-cylinder and 4-cylinder modes, depending on power demand. The latter mode improves fuel efficiency by up to 30 percent. The aluminum engine takes up to 9.5 kilograms (20.9 pounds) off the previous engine weights.

A less obvious but vital part of gaining efficiency, and increased power, is the use of a steel coating on the interior of the cylinders. The weight improvement of aluminum crankcases is achieved without sacrificing the valued robustness of iron-based cylinder bores. Aluminum is soft compared to steel. The unrelenting movement and stress of the pistons can wear down the cylinders and shorten their life. The right coating is a thin layer of metal that bonds to the cylinder surface, providing characteristics that aluminum alone doesn’t possess.

Porsche has already been using thermal spray coatings (APS), in which hot, ionized gases are used to melt metal-based powders and propel them onto the surface of the inside wall of a cylinder to create a coating. The current material composition of the steel coating, about the thickness of a sheet of copy paper, cuts wear by upward of 10 percent compared to the materials of the raceway surfaces used in previous generations of engines. Oil consumption is also down by up to half compared to previous versions of the engine. So, not only is the car powerful, but it has respect for the environment as well.

The coating that helps the Panamera attain its outstanding characteristics uses SUMEBore technology from the Oerlikon Metco brand. For over 20 years, Oerlikon Metco has helped automobile and truck manufacturers improve performance of their engines while cutting weight, improving fuel efficiency, reducing wear, corrosion and CO2 emissions. And, of course, create a driving experience just this side of being in a Formula 1 race car.

Without Limits:
The Oerlikon Blog

10 million people around the globe have read the Oerlikon Blog since its launch at the beginning of 2016 at www.oerlikon.com/stories It features Oerlikon’s pioneering technology and engineering expertise through engaging customer and technology stories.

The reach and interest in the Oerlikon Blog has increased tremendously in the last few months, and Oerlikon is proud that even independent online and print media have used articles from it in their publications. This “Porsche Panamera” story, originally published on the Oerlikon Blog in February, travelled around the globe and reached 2.7 million users.

Check out more stories on customer solutions, striking technologies, powerful innovations and visionary engineers, and subscribe to the Blog to stay informed whenever we publish a new story!