Balzers, Liechtenstein, 5 October 2015 – Extreme cutting speeds, maximised productivity, perceptibly longer service lives – these are the results of real-world tests with the BALINIT ALTENSA AlCrN-based coating developed by Oerlikon Balzers to advance seminal trends in automotive and mechanical engineering applications. At its Stand F17 in Hall 10, the Liechtenstein-based coating technology leader is showcasing another debut during EMO 2015 in Milan: the highly productive INNOVENTA mega, the company's flagship coating system. Further highlights on display from 5 to 10 October include the high-performance BALIQ coatings family and the modular METAPLAS.DOMINO coating systems series.

Machinery costs account for a hefty share of about 30 percent of production expenditure in cutting applications. Thus, it is not surprising that automakers are striving for ever-higher cutting speeds and shorter machining times without trade-offs in production quality. After all, this is the most effective way of reducing production costs. In the quest for greater performance and efficiency, wear-resistant coatings for tools play a genuinely crucial role. Customised solutions for specific applications are the key to success.

To address the ambitious expectations involved in the production of gears, Oerlikon Balzers is leveraging its coating expertise by presenting a high-performance coating at EMO 2015 that has already won acclaim in shop-floor environments: BALINIT ALTENSA is the latest coating in the successful AlCrN family: On a global scale, it has impressed users mainly with respect to its wear resistance, thermal shock stability, and hot hardness in hobbing applications. “BALINIT ALTENSA stands for the highest performance at high cutting speeds and ensures maximum productivity,” noted Dr. Wolfgang Kalss, Head of Marketing & Product Management Tools at Oerlikon Balzers in Liechtenstein.

The new INNOVENTA mega redefines productivity benchmarks as well. Now the largest coating system in the portfolio, it achieves extremely high throughputs with tools such as milling cutters or drills: average batch times of less than five hours are typical. It can accommodate workpieces with heights of one metre or more and a swing diameter of 96 cm. With permissible load weights of up to 3000 kg, it is an ideal platform for coating bulky moulds or sawblades. The INNOVENTA mega can handle the entire repertoire of BALINIT coatings as well as tailor-made coating designs for a wide range of applications. Rapid commissioning, simple operability, and a high level of reproducibility are further features. On the bottom line, the INNOVENTA mega ideally complements Balzers' more compact INNOVA and INGENIA systems.

INNOVENTA mega can accommodate workpieces with heights of one metre or more and a swing diameter of 96 cm. With permissible load weights of up to 3000 kg, it is an ideal platform for coating bulky moulds or sawblades. 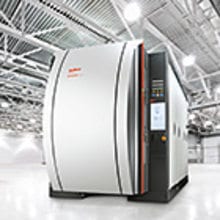 The focus at EMO is also on the BALIQ portfolio. The innovative coating generation is based on Oerlikon Balzers' proprietary S3p (Scalable Pulsed Power Plasma) technology. It combines the advantages of the sputtering and arc evaporation processes, delivering coatings that excel with extreme wear resistance and unmatched smoothness. The market has already embraced BALIQ products for thread cutting tools, micro-machining, finishing applications and reamers. The coatings family is being continually expanded to cover new applications.

For the first time, the former Metaplas product line is being relaunched under the Oerlikon Balzers brand: METAPLAS.DOMINO is a coating systems series based on a modular concept with four different configurations. The modules can be combined to handle a wide range of user needs such as customised Metaplas PVD coatings or predefined production volumes.