Spot on: materials Plasma: the entity that enables innovation in surface solutions

In our Spot on materials series, we have so far presented solid, tangible materials, such as nickel or titanium. This time, we focus on an “entity” (ancient Greek: plasma) without which modern surface solutions would be inconceivable. 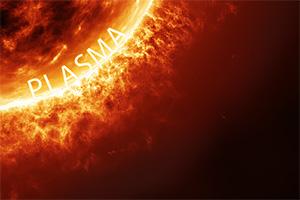 How is plasma formed?
Plasma is the “fourth state of matter” after solid, liquid and gas. It occurs when a gas is supplied with additional energy in the form of heat. The high temperatures cause the electrons to detach from the atomic structure, which creates a mixture of free particles — positively charged ions and negatively charged electrons. The more of these present in the plasma, the more “ionized” it is. The degree of the plasma’s ionization can range from 1 to 100%.

Where is plasma found?
In everyday life, we rarely observe plasmas, but this state of matter is very common throughout the universe. Our sun, which is millions of degrees hot at its core, consists of plasma, as are most stars. Gaseous nebulae and interstellar space are also largely made of this entity. Plasma does occur naturally on Earth — and when it does, it is spectacular! For example, the northern lights and rays of lightning are made of plasma: With temperatures of up to 30,000 °C, lightning can locally heat the Earth’s atmosphere to such an extent that atoms are split, and we see the resulting plasma as a brilliant flash of light.

Like the other states of matter, plasma and its power have been harnessed by mankind for a number of technical uses. But, in order to be used for these purposes, the plasma must be generated artificially. The energy required for this is usually supplied by an electrically-charged gas or strong laser beams.

What is plasma used for?
Plasmas have very different natures but have this in common: they are electrically conductive and can be influenced magnetically. With their differing characteristics, they can be used for many developments and processes — including in energy-saving fluorescent lamps, in plasma displays, for disinfecting medical instruments and even for nuclear fusion in reactors.

Oerlikon Balzers and Oerlikon Metco use plasma for surface coating. “Scientifically speaking, we are dealing with the same thing — plasma research. But when it comes to applications, we are working at the two ends of the plasma spectrum,” agree the materials scientists Alessandro Zedda (Oerlikon Balzers) and Alexander Barth (Oerlikon Metco).

Atmospheric plasma spraying: high pressure and high density
In most thermal spraying processes, work is carried out under normal atmospheric pressure. The coating feedstock, in the form of powder particles, is generally in the size range of 10 to 100 micrometers. This is melted in a narrow plasma jet (6 to 10 mm in diameter) and sprayed onto the surface to be coated. The temperature of the plasma can reach up to 20,000° C, which is equivalent to the surface temperature of our sun! This makes it possible to melt any material. By precisely balancing the properties of the plasma and the material, the particles are brought to their ideal temperature and speed to achieve an optimal coating result.

The plasma generator consists of a narrow nozzle, or anode, through which gas flows continuously, and an electrode or cathode that is concentrically located within the nozzle. The positively charged nozzle and the negatively charged electrode form an electrical couple, thereby ionizing the flowing gas and converting it into a plasma. The coating feedstock material is then injected into the plasma, where it melts and is propelled to the surface to be coated.

“Plasma is very efficient in generating this high heat because all the electrical power is converted into heat. We cooperate with partners and universities in plasma coating research, and the findings are incorporated into new products from Oerlikon Metco on an ongoing basis,” explains Alexander Barth.

PVD coatings: low pressure and low density
For high-quality, ultra-thin PVD coatings, the plasma is generated by evaporating atoms from the metallic target. Ions are then formed by separating electrons from the atoms. These ions are attracted to the substrate to be coated (this can be a component or a tool) by the application of an electrical voltage. They strike the substrate with high energy, diffuse on its surface and combine with each other to form a thin, dense coating. To prevent them from colliding with air molecules during their “journey”, a high vacuum is created.

The generation of plasma requires a large amount of energy — in the form of high voltage up to several hundred volts. The coating quality depends not only on the choice of target material but also on the voltage and the energy of the plasma. “The design of plasma sources is very important for the quality of the resulting coatings. That is why at Oerlikon Balzers, we are engaged in constant research to improve both plasma sources and the resulting coatings,” explains Alessandro Zedda.