The Siemens PG test bed for gas turbines in Berlin is a unique facility in the world. In collaboration with Oerlikon Balzers, Siemens PG was able to further increase the performance limit of the test bed by improving its water brake.

"I believe that in the future we can aim to increase the lifespan of the wheel discs by two or three times, ideally even more."

Moabit, Berlin. The legendary gas turbine plant at Huttenstraße. Ayhan Cetin walks through the final assembly hall. In the middle of the hall, an order is being completed for an SGT5-4000F turbine. In a few weeks’ time, this mighty, high-performance machine will be shipped from nearby Westhafen to the Middle East.

Research engineer Cetin now walks up the stairs to a gallery. From here, we see an area at the rear of the hall surrounded by white sound barriers. This is the gas turbine test bed. This, says Cetin, is where current products and new technologies are “put through their paces.” Several thousand measuring points provide information about performance, efficiency, effectiveness, emission levels and much more. Outsiders can only guess at what goes on behind these sound barriers. What we learn from Cetin is that the facility’s water brake plays a vital role.

Extreme pressure creates challenges
The water brake consists of a steel case that contains a rotor comprising multiple wheel discs. The material: a low-alloy steel. Cetin can talk about the water brake for hours, although his explanations are more suited to the experts – just as when he waxes lyrical about the theory of boundary layer friction in turbulent flow. Put simply, high shear and friction forces cause thermal energy to be produced and extracted from the heat transfer medium (water). Depending on the regulatable flow rate and the effective frictional surface, a torque is created that works against the gas turbine that’s being tested and thus absorbs the energy produced.

In 2010, Cetin was appointed system supervisor of the water brake system at the Berlin gas turbine test bed, the largest of its kind in the world. The challenges associated with a facility of this size are huge. The water brake, in particular, is subject to extreme stress and must be inspected constantly to ensure uninterrupted operation. Cetin is therefore all the more delighted to have recently succeeded in optimizing the water brake in collaboration with Oerlikon Balzers. This involved making the wheel discs more hard-wearing. The process: plasma nitriding. The product: BALITHERM IONIT. The result: longer inspection intervals. But let’s go back to the beginning.

Siemens is one of the world’s leading companies in the field of power generation, and gas and steam turbines form the core business of the technology group. To define its portfolio, it is testing prototypes of new products and technologies. Development times and costs are deciding factors when it comes to the profitability of any company, and the high availability of the gas turbine test bay is therefore essential for Siemens PG.

In a conventional gas turbine power plant, the energy created is absorbed by the generator. In the Berlin gas turbine test bed, however, this is not the case. Here, no continuous power generation can be guaranteed, and thus it cannot be fed into the grid. The mechanical output of the gas turbine is therefore converted into waste heat via the water brake, which in effect replaces the generator and absorbs the energy produced. 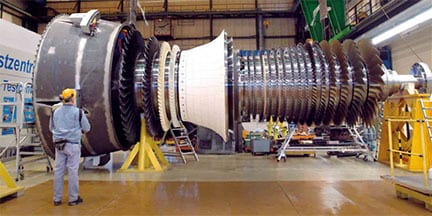 «We are able to save time and money, and to improve the performance of the test bay. We couldn’t ask for more.»

Size comparison between human and machine. The horizontally-placed rotor with turbine exhaust casing is 10 meters long and weighs circa 112 tons. The picture shows the SGT5-4000F gas turbine which has an output of 292 megawatts.

*Ayhan Cetin, born 1977, studied mechanical engineering at the Technical University of Berlin, where he specialized in design technology. He joined Siemens in January 2008 and has been responsible for the water brake in the gas turbine test bed since 2010.

What can protect against corrosion and cavitation?
The Berlin gas turbine test bed was built in 1972, with the water brake following in 1975. Over the decades, however, the demands placed on the facility increased constantly. While 100 megawatts were originally marked as the maximum total output for the test bay, this has since increased to 360 megawatts. Nowhere else in the world other than at Siemens in Berlin are these values achieved.

For a long time, the greatest challenge was presented by the functionality of the wheel discs of the water brake. The wheel discs’ material is susceptible to corrosion, which is triggered as soon as contact with moisture occurs. Rust, for its part, results in the creation of cavitation, which can significantly damage the wheel discs. Cetin mentions centrifugal and coriolis forces and talks about tremendous turbulence in the system. “In many cases,” he says, “cavitation is caused as a result of high flow rates. As the rate increases, the static pressure of the liquid falls. If it falls to below vapour pressure, vapour bubbles are formed that are carried along in the flow and can suddenly implode. This results in the formation of microjets that cause material damage with their high speed and extreme pressure load.”

Cavitation leads to vibration problems, imbalances that can impair the function of the water brake. Should several wheel discs fail, for example, the brake can no longer be operated, and the gas turbine test bed is out of action. While the discs can be mechanically reworked or exchanged if necessary, this would result in frequent inspections and high maintenance costs. There were times, says Cetin, when the wheel discs were unusable after relatively few hours of operation.

Siemens PG and Oerlikon: Solving it hand-in-hand
The preliminary discussions between Siemens PG and Oerlikon were held in autumn 2014. Oerlikon Balzers’ Martin Fromme says: “The economic objective was to significantly increase the lifespan of the wheels.” The first tests and basic analysis were carried out at the Clausthal University of Technology in 2015, and the first samples were prepared in 2016. Plasma nitriding with BALITHERM IONIT involves diffusing nitrogen 0.2 millimeters into the steel. In the test phase, the nitrided brake discs showed no corrosion or cavitation after 25% more hours of operation. “The discs looked almost the same as they did on the first day,” says Cetin. The first series went into production at the beginning of 2017.

We couldn‘t ask for more
Now, nine months later, Ayhan Cetin still has no cause for complaint. On the contrary. Recently, a gas turbine was tested at 50 hertz. The result: no cavitation, not even any corrosion. “However,” says Cetin, “we have not yet reached the wear limit. I believe that in the future we can even aim to increase the lifespan of the wheel discs by two or three times, ideally even more.” Cetin is also confident about the turbine currently in the test bed: “I do not anticipate any significant maintenance, or that the brake discs will need to be replaced.” So, does this mean that everything ran smoothly with the collaboration between Siemens PG and Oerlikon? “We are able to save time and money, and to improve the performance of the test bay,” says Cetin. “We couldn’t ask for more.” 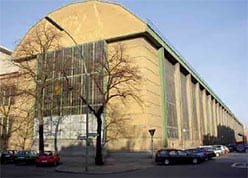 A German industrial monument
The factory in the Moabit area of Berlin, in particular the gas turbine hall that was completed in 1909, is an internationally renowned monument of industrial architecture. The leading architect Peter Behrens was commissioned to give the building an aesthetic and unmistakable appearance without concealing its industrial significance. The result was one of clear elegance, despite the vastness of the building. It is also extremely rare for a factory building to have served its original purpose for over 100 years. The thousandth gas turbine was produced in 2016.