Since their international premiere in 2012, the ingeniously simplistic »Plus-Plus« has taken children around the globe by storm. Within only four years, the machine pool of the Danish toy manufacturer by the same name grew from 2 to 24 injection moulding lines. Oerlikon Balzers delivers additional efficiency.

»One shape. Endless possibilities!”«is what the Plus-Plus promise. The name says it all: 21 colours and two sizes, but only one single basic shape – two pluses joined together. You can build anything imaginable with them: Cars, dinosaurs, jewellery as well as entire farms and circus tents, including a vehicle fleet and all the relevant animals.

»The only thing you need for Plus-Plus is your imagination,” explains CEO Martin Pihl. That there has been no lack in this department is underscored by the thousands of pictures of Plus-Plus objects on Pinterest and other forms of social media. Not only the young builders over the world are enthused about Plus-Plus: “Especially teachers and caregivers recognize the fun factor in our colourful parts, but also see the educational value: Plus-Plus has no predefined purpose. That means there are no limitations as to what you can build with them – regardless of whether in two or three dimensions. This stimulates children’s imaginations, for one thing, and it also promotes the development of fine motor skills,.« says Martin Pihl.

The sector quickly recognized the potential of the Plus-Plus offer. The brand has raked in a whole series of distinctions and awards over recent years. “During the exhibit ‘Century of the Child,’ we even made it into the MoMA, Museum of Modern Art in New York,« Martin Pihl explains. 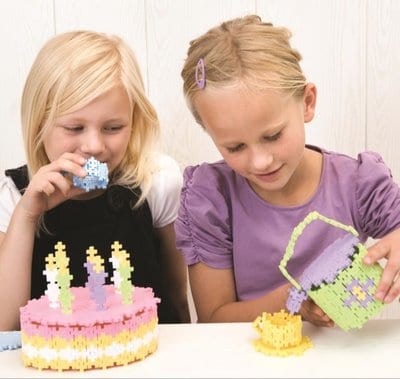 Along with success came higher demand, and between 2012 and 2016, the machine pool grew from 2 to 24 injection moulding lines. Plus-Plus chose to rely on BALITHERM PRIMEFORM early on in order to improve the surface density and hardness of the tools. Previously the tools had more downtime due to continuous maintenance, now with the Oerlikon Balzers coating, the operation can run for longer intervals with much easier cleaning and general service: a simple cloth and a drop of alcohol will now suffice. This also makes it easier to use the same tool to produce parts in a different colour.

»An additional problem was the degassing of the plastic inside the tools insert«, comments Frederick Halbout, sales engineer at Oerlikon Balzers. »This meant that the inserts could only be used for three months at the most. Then they had to be cleaned in an elaborate process and often needed repairs and some were even completely unusable.« The solution was BALINIT CROMA which significantly increased the stability and resilience of the inserts: »After eight months in non-stop operation, we inspected the coated inserts. All we had to do was clean them and they were as good as new!«

Compliant to the strictest material regulations

Children’s toys especially are subject to very strict material regulations, not only within the European Union, but also in other markets. This includes for example, regulations by the American Food and Drug Administration (FDA). »Thanks to BALINIT C coated ejector pins, we are able to completely refrain from the use of lubricants. Previously, we had to dispose of parts that had come into contact with lubricants. That never happens anymore! And it is reassuring to know that even the BALINIT coatings used in our production environment are themselves compliant with these regulations,«, says Martin Pihl.