Errors not allowed Marc Hervé runs with a niche. But it‘s very fast …

On his own time, he takes to the road in a modest family vehicle. But when he advises his customers, everything revolves around Formula 1 racing cars, Moto-GP bikes or Formula E racing cars, and above all the question: Which coating will make them a decisive tenth of a second faster than the competition? Marc Hervé drives performance in a niche and knows the secrets of the big and famous in motorsports.

In motorsports, there is only one goal: to win. Everything else is secondary. Normally, Oerlikon Balzers coatings for the automotive sector are used to reduce friction and extend the service life of engine components — with the aim of making engines run more efficiently. 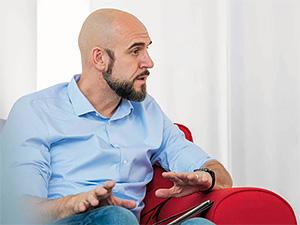 In racing, it’s different, and that difference is measured in tenths of a second. Those fractions rely on more rather than less: the aim is not to reduce friction, but to get even more power — and therefore higher speed — out of the engine thanks to the coating.

Marc Hervé, Global Segment Manager Motorsports at Oerlikon Balzers, says: “I am not a coatings salesman, and I don’t have to negotiate the price. When a customer calls me, he either has a problem he wants to solve with our help, or he is convinced that we are the right partner for a new project. In that case, I advise, act as a sparring partner for what-if considerations, and often serve as a coach until we are sure: This will work. Because in motorsport, mistakes are not allowed: When you go out on the track, you have to be sure it’ll work.”

“When you go out on the track, you have to be sure it’ll work.”

No fiddling around until the racing season is over
Even off the racetrack, it’s all about speed. Development times of several months and long internal approvals? Marc shakes his head: “I work directly with the teams that develop the racing cars and with their suppliers. From the first meeting to the finished solution, we have to manage that in two months. We can’t fiddle around until the racing season is over! That’s the spirit you need to have to work in this industry. This is lived by the racing teams, by us at Oerlikon Balzers in Limoges, and even by the drivers who bring the engine parts to our customer center for coating: They often spend the night in the car park so that they can bring the finished parts to their team without wasting time!”

Is it even necessary to ask what still fascinates him about his work after two decades? He laughs: “Imagine, I’ve had the same desk in the same office for 21 years! I was born and raised in Limoges, studied mechanical engineering there and got my first job with Sorevi. Today the company is called Oerlikon Balzers. Last year, we celebrated our 30th anniversary, and I celebrated my 20th anniversary at the same time — it was very emotional!”

“When a customer calls me, I advise, act as a sparring partner for what-if considerations,
and often serve as a coach until we are sure: This will work.”

No noise, no smell. But extremely exciting.
In motorsports, a distinction is made between “racing” and supersports. The first category includes Formula 1 — which is dominant mainly in Europe — the American NASCAR series, and rally or motorcycle series such as Moto-GP and Superbike.

“Supersports” include races with high performance vehicles used on the road, such as super or hyper cars and also motorcycles. For the past several years, races with electric drives as opposed to traditional combustion engines (Formula E, E-Rallyecross and electric motorcycles) have been added to both types.

How now — Formula 1 and electric in the same breath? Marc laughs. “Yes, I know what you’re thinking! At my first E-Race, my first thought was: Children’s toys! I mean, they had to change their battery in the middle of the race! And then, no noise, no smell … it was awful!” Today he is convinced that electric and hybrid drives are the future — in motorsports. For himself and his team, however, this also means that they are developing solutions for a completely new group of customers with completely new applications: “This is extremely exciting!”

Coatings for an industry that wants to become sustainable
In general, sustainability is driving the entire industry. The question is: How do you put even more power on the track without harming the environment? When Marc started selling coatings for racing 20 years ago, that was no question at all: “Back then, we drove with twelve-cylinder engines, and it was not unusual for four engines to be worn out during a race weekend. For us as supplier that meant high volumes, many parts, low-cost coating. Today, it’s completely different: the cars run with six-cylinder engines, and they have to deliver top performance for at least five race weekends,” he explains. So the coatings have to ensure that these engines run longer and more reliably, and get the maximum out of the allowed amount of fuel. “That’s what racing today is all about, saving cost and fuel!”

His personal dream car: a Nissan GTR
Motorsports is a world of its own, but also a very small one. “We work for almost all professional racing teams, and therefore for direct competitors. So my colleagues in Limoges and I know some of the best-kept secrets of the motorsports world. We’re very proud of this because it shows how much the motorsports teams trust us.”

Marc Hervé says of himself in all modesty: “What I do is an absolute niche not only at Oerlikon Balzers. There are not many Marc Hervés in the world.” We believe him on that without hesitation. In any case, he has managed to infect us with his enthusiasm. At the end of the interview, there is only one question left: What kind of car does someone drive who deals with the fastest cars in the world every day, and also occasionally drives a Porsche or Ferrari on the race track himself? Marc grins: a Skoda Superb! And he puts it into perspective: “But one day I’m going to buy my dream car, a Nissan GTR, and I want to pick it up myself in Japan! Until then, I’ll have to wait a bit, because I promised my wife that we’ll pay off the house first — but somehow she always finds a new renovation project!”