Balzers, Liechtenstein / Hannover, Germany – September 16, 2013 – Oerlikon Balzers will introduce a new generation of wear-protective coatings called BALIQ at the EMO, the world’s leading metalworking trade fair to be held in Hannover. BALIQ significantly outperforms current coatings in many ways and can be modified to create tailored, user-specific applications. “BALIQ enables our customers to significantly boost productivity, process reliability and lower costs,” says Dr. Hans Brändle, the CEO of Oerlikon Balzers. “With this pioneering product, we have secured our position as an innovation leader for years to come.”

Coatings are already a driving force behind the productivity gains being achieved by the metalworking industry. Due to high productivity requirements, a broad variety of applications would not be possible without coatings. Compared with untreated tools, coated instruments last up to much longer and facilitate considerably higher cutting speeds. Oerlikon Balzers laid the industrial groundwork for these strides 35 years ago when it introduced the BALINIT coating generation. Just like such market pacesetters as the VW Golf and the Apple iPhone, BALINIT is setting standards in coating technology. “BALINIT has written a significant chapter in the success story our company has enjoyed in recent decades,” says Oerlikon Balzers CEO Brändle. “With BALIQ, we are setting another industry standard that complements BALINIT in applications that have not been explored before.”

With the market introduction of the BALIQ coating family, Oerlikon Balzers is once again entering a new dimension of productivity and reliability in metalworking. Until now, it has been impossible to coat tools used in microdrilling. But extensive testing conducted in cooperation with customers has demonstrated that BALIQ is capable of doing this job, extending the life time of these special and expensive micro drills by 30 times and more. In other areas of application like gear processing, previously unusable coating materials can now be applied, an improvement that can boost tools’ life time by nearly 300 %.

The secret of these many improvements is the unusually smooth surfaces as well as the extreme hardness, thickness, wear resistance and adhesive strength exhibited by BALIQ coatings. The foundation of this combination of qualities is the S3p process technology (S3p stands for Scalable Pulsed Power Plasma) that Oerlikon Balzers introduced to professional audiences two years ago. In one single process, S3p integrates the previously non-combinable qualities of the two coating technologies sputtering und arc evaporation. “With BALIQ, we are launching the global marketing campaign for our S3p technology and are generating further momentum for our growth strategy,” Brändle says.

Images:
With BALIQ MICRO for Micro Tools and BALIQ TAP for Thread Formers and Taps, Oerlikon Balzers presents the new generation of coatings based on the innovative S3p-technology. 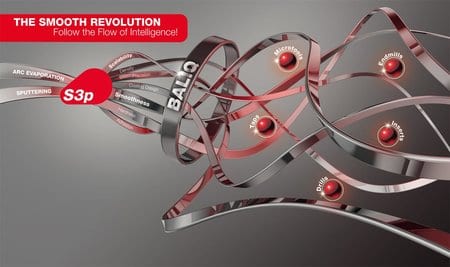