2020 Key Group Figures at a Glance

in CHF million (as % of assets)
1 Attributable to shareholders of the parent.

in CHF million
¹ Before changes in net current assets 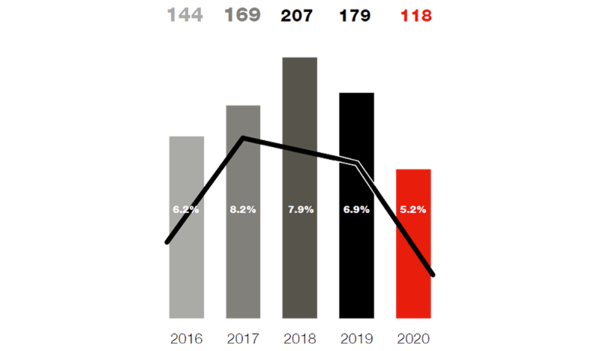 in CHF million
— In % of sales

Oerlikon is a leading global technology and engineering Group providing market-leading solutions and services for surfaces and manmade fiber production in diverse industries. The Group is structured in two Divisions: Surface Solutions and Manmade Fibers. Each Division offers technologies and solutions under well-established industry competence brands and adopts strategies specific to customers’ needs and requirements in the respective market.

Oerlikon delivered a resilient performance in a highly challenging environment driven by COVID-19. The Manmade Fibers Division sustained a stable and steady performance. The Surface Solutions Division’s end markets were impacted by the pandemic, particularly aerospace. In the second half of 2020, gradual recovery was noted in the automotive and tooling industries.

A portfolio and filled pipeline of innovative technologies, a global presence and industry-leading scope of comprehensive services continue to be key components of Oerlikon’s strategy. The Surface Solutions Division generated 53% of total Group sales in 2020, while the Manmade Fibers Division accounted for approximately 47% of Group sales.

As of December 31, 2020, Oerlikon had total assets of CHF 3 340 million, compared to CHF 3 647 million at year-end 2019. The Oerlikon Group had equity (attributable to shareholders of the parent) of CHF 1 324 million, representing an equity ratio of 40%. The decrease in total assets is attributed to lower cash and cash equivalent position and an increase in contract liabilities.

Cash flow from operating activities before changes in net current assets decreased 37.3% in 2020 to CHF 202 million, compared with CHF 322 million in 2019. Net working capital, defined as trade and trade note receivables plus inventories minus trade payables and current customer advances, totaled CHF -86 million in 2020, versus CHF 70 million in 2019.

In the first quarter of 2020, the Manmade Fibers Division took over the majority stake in the joint venture, Teknoweb Materials S.r.l., to extend the nonwoven production system portfolio for disposable nonwovens. This move strengthened the Division’s position in the nonwoven market, which was marked by significantly higher demand in 2020 as a result of the pandemic-drivenneed for face masks.

Oerlikon believes that a dividend payout is an important means of returning value to shareholders. Thus, the Board of Directors will recommend an ordinary dividend payout, consistent with the previous three years, of CHF 0.35 per share at the 48th Annual General Meeting of Shareholders on April 13, 2021.