2019 Key Group Figures at a Glance

in CHF million
¹ Before changes in net current assets 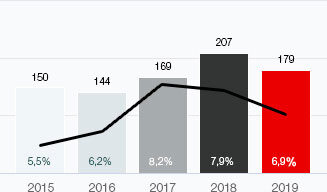 in CHF million
— In % of sales

Oerlikon is a leading global technology and engineering Group providing market-leading solutions and services for surfaces and manmade fiber production in diverse industries. Following the divestment of the Drive Systems Segment, the Group is structured in two segments: Surface Solutions and Manmade Fibers. Each segment offers technologies and solutions under well-established industry competence brands and adopts strategies specific to customers’ needs and requirements in the respective market.

Oerlikon delivered 2019 results around the same level as in 2018 despite the challenging market environment. These results underscore the strength of Oerlikon’s portfolio and business model. In a year beset by political uncertainties and ongoing disputes in global trade agreements, industries proceeded with caution. This understandable reticence did not change Oerlikon’s strategy or slow its technological advancements. Oerlikon continued to invest in its businesses and structural growth.

Maintaining a portfolio of innovative technologies, a global presence and industry-leading scope of comprehensive services continue to be key components of Oerlikon’s growth strategy. The Surface Solutions Segment contributed 57% to total Group sales in 2019, while the Manmade Fibers Segment accounted for approximately 43% of Group sales.

As of December 31, 2019, Oerlikon’s balance sheet totaled CHF 3 647 million, compared to CHF 4 545 million at year-end 2018. The Oerlikon Group had equity (attributable to shareholders of the parent) of CHF 1 756 million, representing an equity ratio of 48%, compared to CHF 2 001 million, or an equity ratio of 44% as at December 31, 2018. The decrease in total balance sheet is attributed to lower cash and cash equivalent positions and reduced current financial investments and derivatives as a result of the payout of dividends and the redemption of a matured bond in 2019. Total liabilities in 2019 decreased mainly due to the liabilities classified as held for sale in 2018 was no longer valid. As a result, net liquidity at the end of 2019 was slightly lower at CHF 333 million compared to CHF 398 million at 31 December 2018.

Cash flow from operating activities before changes in net current assets decreased 24.9% in 2019 to CHF 322 million, compared with CHF 429 million in 2018. Net working capital, defined as trade and trade note receivables plus inventories minus trade payables and current customer advances, totaled CHF -70 million in 2019 versus CHF -79 million in 2018.

Capital expenditure (CAPEX) amounted to CHF 179 million, compared to CHF 207 million in 2018. Excluding amortization of acquired intangible assets, the CAPEX to- depreciation ratio was 1.42 times, which is higher than the Group’s target of between 1.0 to 1.2 times due to significant investments in additive manufacturing and in building up surface solutions businesses such as ePD and CVD.

To further strengthen its expertise and product offerings to its customers, the Surface Solutions Segment completed three acquisitions in 2019. At the end of the first quarter, the acquisition of TeroLab Surface GmbH in Langenfeld, Germany was closed to expand the Surface Solutions Segment’s portfolio of thermal spray coating services for industries like agriculture, steel and automotive as well as to machine OEMs. In the third quarter, Oerlikon acquired AMT AG in Switzerland to extend its product and service offerings for thermal spray applications and turnkey solutions. Toward the end of 2019, Oerlikon acquired D-Coat GmbH in Germany to widen Oerlikon Balzers’ thin-film coating portfolio, particularly for cutting tools used in the aerospace and automotive industries. At the end of February 2019, the divestiture of the Drive Systems Segment to Dana Inc. was completed.

Oerlikon believes that a dividend payout is an important means of returning value to shareholders. As an efficient use of our current cash position and capital, the Board of Directors will recommend a dividend payout of CHF 1.00 per share at the 47th Annual General Meeting of Shareholders on April 7, 2020. The proposed dividend comprises an ordinary dividend consistent with the previous two years of CHF 0.35 and an extraordinary dividend of CHF 0.65 per share.